In recent times we have heard increased concerns about smoking (and vaping) and some lung diseases. While I’m all for keeping your health as best as you can, it doesn’t mean that you should deprive yourself of everything that someone may say that’s bad for your health. Remember, it’s typically excess everything that causes issues.

And while there are many studies that have related smoking and several lung diseases, there is not a single solid proof other than hear-say that connects the use of electronic cigarettes and lung issues. This article is dedicated to a specific illness that is very severe and modern medicine does not have a solid proof as to what causes it and how to treat it.

This disease occurs in the lungs is very difficult (almost impossible) to treat is the so-called popcorn lung, otherwise known as Bronchiolitis Obliterans. This disease causes scarring on the lungs, making it difficult to breathe and as the disease progresses, it becomes more difficult for the oxygen to reach the lungs, thus the need to use an oxygen tank and live a very limited life.

It is very difficult to catch it in the early stages, as it mimics the symptoms of other illnesses. Its main symptoms are shortness of breath, wheezing of the lungs and dry cough. Simple symptoms, but a very serious disease.

Who Usually Gets Popcorn Lung Disease?

It is very unfair to lay such claims, especially without any firm proofs. The CDC website and the American Lung Association both claim that they “know” for certain that diacetyl is the cause for popcorn lung, but no one supports this statement with firm, concise evidence.

One can easily see a pattern occurring here: diacetyl causes popcorn lung. Diacetyl is found in e-juice used for vaping. Thus, vaping causes popcorn lung. So not true. This is some kind of propaganda, or a common misconception put in motion to scare people and revert them from something that medicine doesn’t have any proof about.

Indirect Support For The Tobacco Industry

Another thing to consider is that a single e-cigarette is usually vaped all day, so even the heaviest smoker that would use two e-cigs a day gets about 28 micrograms of diacetyl per day.  That’s not even close to the content of diacetyl that’s found in a single tobacco cigarette.

An average smoker smokes a pack a day, usually equaling to 20 tobacco cigarettes, sometimes more. In terms of inhaled diacetyl, this comes to about 6,720 micrograms of diacetyl daily. That is so, so much more than the diacetyl in e-cigs, but no one mentions this fact. And they neglect to mention all the other unpleasant compounds found in tobacco cigarettes.

Facts About Smoking And Vaping

And there is not a single relation between the popcorn lung disease and the use of cigarettes. In fact, even though an average smoker inhales a large amount of diacetyl, nobody claims that smoking causes popcorn lung.

The numbers in this article and the facts are drawn from official sources: a respected medical journal and a governmental website. So there are no bogus claims and speculations, or propaganda that supports one side instead of the other.

I have just shared some simple facts and raised a few solid points for you to think about. But, if you have any issues or concerns about smoking, vaping or using e-cigarettes, then feel free to consult your physician for advice on this matter. I’m going to start suggesting that you substitute your smoking and vaping for tinctures, gummies, edibles, and other methods if you’re worried about the impact on your lungs. The good news is that you’ve got plenty of options and we are here to help you find something that’s just for you. 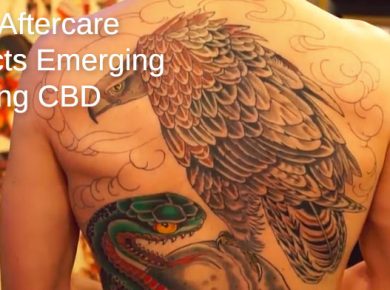 Tattoos are more popular than ever today. It seems like more people have tattoos versus those that do not. Well, a significant number of hemp companies in the marketplace are…

The NFL is tough. Playing in a single game is said to be like getting into a car accident. That’s how much pain they typically endure. Professional athletes are prone…