The most commonly asked question we hear is, “Is hemp extract the same as cbd oil?” and “Are hemp and CBD the same?” These are two questions we get almost every single day. Even worse, as consumers we are flooded with information about hemp this, CBD that, and a lot more. But do you really know the differences between these terms? The differences that you can expect from taking one or the other? Well, don’t worry if you don’t, as you are about to learn the differences between CBD oil and hemp oil, as these are the two most-talked and most present products on the market today.

You may have been misled into thinking that these are one and the same, but you can’t be more wrong, as these two are completely different items, even though they come from the same plant. Keep reading for more in-depth information on this.

Hemp is the source of hemp oil

The hemp oil is something that has been around for ages as a remedy for many issues. Obviously, hemp oil is made from hemp – which is a specific cannabis sativa strain known for its low content of THC. If you don’t know what THC is, stay tuned.

THC, CBD, CBD, CBG and a lot more are cannabinoids that are naturally occurring chemicals in the cannabis plant. THC is the psychoactive component and one that we’ll not be dealing with here. CBD is the second most abundant cannabinoid in the cannabis plant, and the one with the most health benefits, which is kind of the point.

The cannabis sativa strain known as industrial hemp is very rich in CBD and very poor in THC, and it is the reason why this plant is cultivated in the first place. Once the industrial hemp crops get to a mature state, bloom and give seeds, it is harvested, dried and then the seeds are collected and pressed to extract the oil from them. This oil extracted from the seeds of the hemp plant is known as hemp oil.

Because THC is not present in the seeds of the plant, there is a very unlikely chance that the hemp oil will contain any viable amount of THC. There is a slight chance that some THC can be present, but it is a banned substance, and all the manufacturers remove it completely from their hemp oil products.

Just as any other plant-based oil (like coconut, palm, and olive oil), the hemp oil is rich in useful fatty acids, minerals, and vitamins. To draw the most benefits from the hemp oil, you can use it as a food supplement, add it to your food and drinks, or take it orally.

In recent times there has been a rise of hemp-based products that contain hemp oil like personal care products and beauty products because of its excellent nutritious benefits. It is packed with Omega-3 and Omega-6 fatty acids and the fat-soluble vitamins like D, E, B, B1, B2 and B6 that are essential for the health of the skin and other organs.

On an industrial scale, the hemp oil can be used for the production of lubricants, plastics, paints, and biofuels. Yes, hemp oil is a great source material used for many applications.

As I mentioned above, the composition of the hemp oil is such that it adds greatly to the overall health condition. It is useful for the brain, the nervous system, the heart, kidneys, and skin. It has great moisturizing effects on the skin and protects it from the harsh environmental stressors. When taken orally, the hemp oil helps the digestive system, and its fatty acids positively affect the cholesterol and help improve the overall metabolism of the body.

So there is a lot to be gained from taking hemp oil.

Hemp oil is the source of CBD oil

As one of the main components of hemp, Cannabidiol (CBD) is the most popular of the cannabinoids and the most useful one. Once the hemp oil gets extracted from the hemp seeds, the oil contains a blend of all the cannabinoids found in the hemp plant.

And then, the pure CBD isolate, which reaches purity up to 99%+, gets dissolved into an appropriate carrier oil, most likely medium-chain triglyceride (MCT) oil like coconut oil. This is now known as CBD oil.

To use CBD oil, you can take it orally, as a capsule, in a vape liquid, and as a part of a topical cream. Once the CBD oil enters your bloodstream, it gets absorbed and it binds with the specific CB1 and CB2 receptors, which are a part of the endocannabinoid system.

The endocannabinoid system is responsible for keeping your body in homeostasis. That means keeping your bodily functions in normal range affecting your mood, emotions, appetite, sleep patterns, and the normal function of the hormones. Our bodies have the ability to produce cannabinoids that govern the cannabinoid system, and if this production gets off balance, then there are serious issues happening to your body.

The intake of CBD stimulates the production of the cannabinoids, bringing back the balance in the body, and improving the physical and mental condition of the user. This is felt as an improvement in behavior, reducing chronic pain, reducing anxieties and diminishing feeling restless, improved eating habits and more.

Here I’ve explained the basic differences between hemp oil and CBD oil. Both have their merits, and I’m a fan of both. That said, to improve the general wellbeing of the body you can select hemp oil, but to tackle a more specific health issue, then taking CBD oil may be more preferable. 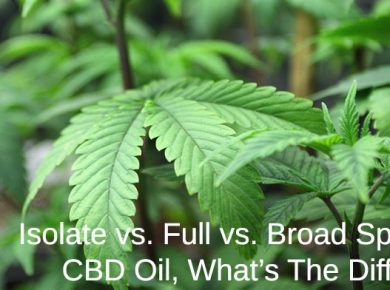 Today I’m going to share the differences and similarities between the various types of CBD oils. You’ve got Isolate, Full-Spectrum, and Broad-Spectrum to choose from, but you might not know…
Whether you’re brand spanking new to vaping or you’ve become a seasoned box mod specialist, there’s one thing that you have in common with one another, you look for stuff…