Michigan is one of ten US states where marijuana and hemp are completely legal. The growing of industrial hemp was first legalized in 2014 with an agricultural pilot program where universities could cultivate hemp for research purposes. The use of marijuana for medicinal purposes was allowed in 2008, and in 2018, it was allowed for cannabis to be used recreationally.

The state of Michigan has regulations in place regarding the use of CBD. Here it is legal to use CBD products with up to 0.3% THC in them and they need to be derived from industrial hemp. In this case, the CBD products fall under the protection of the industrial hemp laws and are legal to be used in Michigan.

Hemp and CBD – the essentials

Hemp and marijuana are the two varieties of the cannabis plant. The marijuana plants produce a high amount of THC, tetrahydrocannabinol, and the industrial hemp plants produce high amounts of CBD, cannabidiol. While the marijuana plants usually have practical application as a recreational drug, the industrial hemp has a variety of useful applications such as paper and fiber production, biofuel, insulation and even human and animal food.

Since there is no way to limit the THC or CBD production by the hemp plants, there are many varieties that produce high THC and low CBD, and many strains that produce high CBD and low THC contents. The latter is especially favored by the people using cannabis for medicinal purposes. Here I bring you two CBD-rich strains that are favored by the users of cannabis for medicinal purposes.

The State of Michigan has begun to look at hemp as a possible commodity in 2010, but it was in 2014 when the state’s legislative body first allowed the cultivation of industrial hemp. In 2015, with the passing of a bill, the industrial hemp was separated from marijuana, making it legal to grow in Michigan. Since then, the laws have changed significantly, but it was in 2018 when the CBD oil and other CBD products became completely legal in the State of Michigan.

Before in order to get CBD oil, people needed to have a medical marijuana registration card and there was no distinction between hemp-derived CBD and marijuana. Since March 2019 people can freely go and buy any type of CBD product they want, without the need for a medical marijuana card or any other type of prescription or license.

The use of marijuana for medicinal purposes was legalized in Michigan in 2008. The patients need to have one of the qualifying conditions like cancer, chronic pain, autism, arthritis, glaucoma, HIV/AIDS, Alzheimer’s ALS, wasting syndrome, nausea, PTSD, OCD, spinal cord injury, seizures and other serious health conditions that can benefit from the use of marijuana.

The patients need to be registered with the Michigan Medical Marijuana Program and they can keep up to two and a half ounces of usable marijuana. The law also allows patients to grow cannabis at home, with up to 12 plants in a secure location that is not visible by the general public. Currently, there are close to 300,000 people in Michigan that depend on medical marijuana. Anyone interested more in gaining a license for medical marijuana in Michigan can find more on the site of the Michigan Medical Marijuana Association.

The State of Michigan has become the tenth state in the USA that has allowed the use of cannabis for recreational use, with the law taking effect in December 2018. Since then the sales have soared and are expected to reach about $663 million in 2022.

It is now legal to carry up to 2.5 ounces of weed in Michigan, or up to 15 grams of concentrate. At home, it is allowed for people to have up to 10 ounces of weed, and anyone above 21 years of age can grow up to 12 plants for personal use. However, there are fines and penalties for people that will be caught selling large amounts of weed. Michiganders now enjoy some of the most liberal weed policies in the entire US.

The Mitten State has implemented some very “unreasonable” laws related to the buying and use of CBD. Before 2018, only people with medical marijuana cards were eligible to buy and use CBD, and they could get their CBD products from medical marijuana dispensaries across the state.

Because the law related to CBD use in Michigan has changed recently, now people can buy the best CBD oil and other CBD products from many retails stores across the state. These are mainly concentrated in the bigger cities like Detroit, Ann Arbor and Grand Rapids. For people that don’t like to go out and buy CBD oil in public, they can order it online in the comfort and privacy of their own home.

To wrap it all up…

Michigan has allowed the use of marijuana for medicinal purposes in 2008. Later, in 2014 the initial industrial hemp program was installed, and in 2016, the state allowed commercial cultivation of hemp. The use of CBD products, even though these are derived from industrial hemp, was limited to only people that are registered as medical marijuana users.

March 2019 brought changes in the legalities related to CBD use in Michigan, and now it is completely legal for any adult to buy and use CBD oil and other CBD products. To the great satisfaction of the citizens and people visiting Michigan – weed became completely legal here in December 2018.

Overview: The State of Montana has legalized industrial hemp as an agricultural crop in 2001, removing it from the list of controlled substances, as long as it has less than… 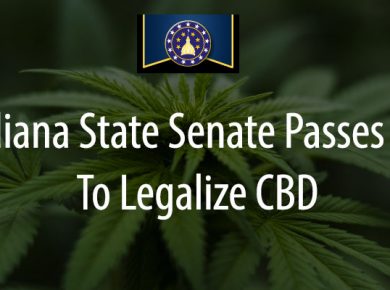 On Monday in Indianapolis, Indiana, the day ended very differently from the way it started. Sure, it was the Monday after the Superbowl and most people were taking the day…