On Monday in Indianapolis, Indiana, the day ended very differently from the way it started. Sure, it was the Monday after the Superbowl and most people were taking the day off, but not the state Senate. In fact, they passed perhaps one of the most crucial bills they’ve ever come across with regards to cannabidiol oils. 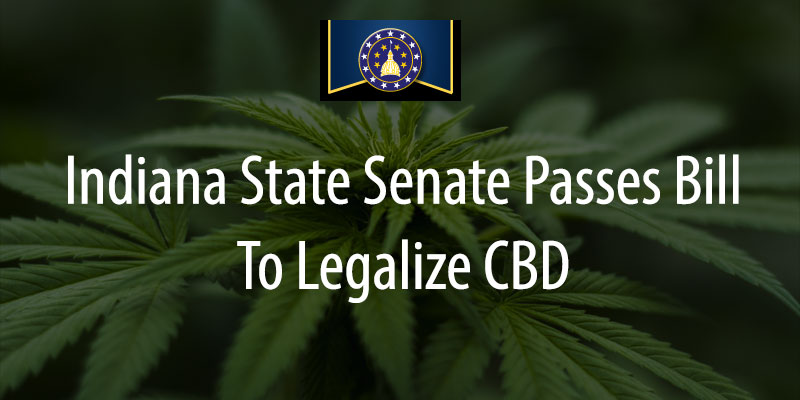 There’s a bill that passed, which is commonly known as Senate Bill 52. This bill gives all Indiana residents aka Hoosiers, the right to purchase products containing CBD oils. There’s a catch though, they’re only allowed to legally sell CBD oil which contains 0.3 percent of THC or less than that amount.

If you’re interested in reading the bill, you’ll find it right here.

For those unfamiliar with what THC is, we’ve covered in on this page, but I’ll give you a quick rundown. THC is also known as Tetrahydrocannabinol is the component which gives you the “high” feeling that most casual cannabis users look to achieve.

However, this bill isn’t helping them, nope not at all. Instead, it’s meant to help individuals that might benefit from the use of CBD oil due to having various conditions they’re dealing with such as cancer, pain, epilepsy and more.

According to the author of the Senate Bill 52, Republican state senator Michael Young says, “So many people have benefited from using CBD oil.”

Based on my research, consumers are not 100% in the clear here as of yet. The bill is headed to the House of Representative where it will be considered further.

All I can say is that given the low THC, if the House agrees then chances are we’re going to see lots of movement from many other states that we haven’t already.

As this continues to build, we’ll be covering everything that we can in order to provide information for the folks of Indiana. The biggest takeaway here is the Senate bill 52 has details on the labeling laws of CBD-based products and more. Whereas, the House hasn’t defined anything of that nature just yet. The Senate approved the bill 35-13 on this memorable Monday.

The State of Oklahoma allowed the cultivation of industrial hemp for research and development purposes with House Bill 2913 passed in 2018. There is a CBD-specific law and a medical…
Michigan is one of ten US states where marijuana and hemp are completely legal. The growing of industrial hemp was first legalized in 2014 with an agricultural pilot program where…